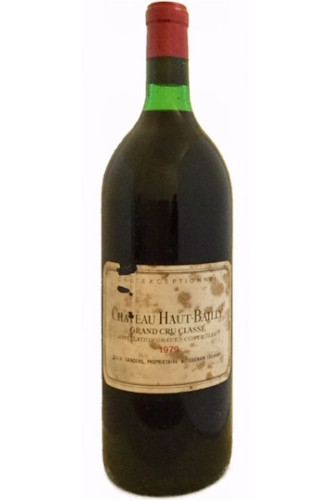 MAGNUM of Graves Grand Cru Classe in excellent condition. A fabulous gift for a Bordeaux lover and described by wine critic, Robert Parker as 'consistently one of the most delicious wines of this somewhat overlooked vintage... it is harmonious and lovely'. Only 2 Magnums left!

Excellent with levels at the base of the neck/very top shoulder. The labels are foxed and slightly damaged though all details are clearly legible. No signs of deterioration with the wine still showing a bright ruby colour. All in all an excellent example of this vintage.

The vineyard of Haut-Bailly began to take shape when the Goyanèche family acquired the best vine growing plots in the 1530s. The estate remained in the Daitze Family until 1630 when it was purchased by Firmin Le Bailly and Nicolas de Leuvarde, wealthy Parisian bankers and lovers of Graves wines. Following substantial investments, the property continued to be passed down the Bailly family line until 1736, when Irishman Thomas Barton took the helm. His strong business network allowed him to spread word about the quality of Château Haut-Bailly at a time when French ‘claret' was beginning its rise to stardom in England and Ireland.

After changing hands several times over the proceeding centuries, the purchase of Haut-Bailly in 1955 by Daniel Sanders, a Belgian negociant, opened up a new era. Daniel and his son, Jean, recomposed the vineyard, renovated the winery and took pains to select only grapes from the best vines for their grand vin. They succeeded in giving the wines a unique style and reputation, and Haut-Bailly cemented its image as a great wine on the international marketplace.

One of our favourite wines, Haut Bailly has never disappointed and we will part with these last two magnums with a heavy heart. Magnums also cellar better than normal 75cl bottles.

You can buy Chateau Haut Bailly Pessac Leognan 1979 today and have it delivered in Eccleston, or most of the St Helens area that same day. All other UK mainland deliveries are shipped out either the same day or next day (click here for cut off times and delivery charges) on a 24 hour courier service.

We regularly check our prices against a wide spread of online retailers to ensure we are competitively priced. For some lines we know we offer the lowest regular prices in the UK, for most others we are very competitive. However we know sometimes we miss something, so if you contact us, we'll always check to see if we can offer a price match against our competition.

It is an offence for a person under the age of 18 to buy or attempt to buy alcohol. By making a purchase, you acknowledge that you are 18 years of age or over.