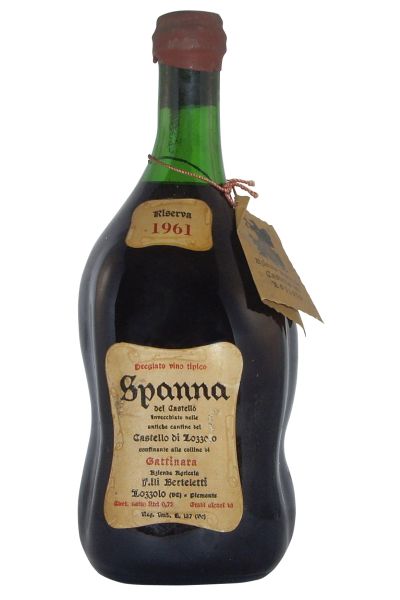 In Italian wine, Spanna is another name for the Nebbiolo grape, considered to be the most noble of Italian varieties and the one that is used to make Barolo. It has enormous ageing potential and this wine is no exception...

These unusually shaped bottles are in great condition for a wine that is more than 50 years old. The levels are excellent at around 3cm from the base of the cork and the labels are clean. The top is sealed with a hard wax, some of which has been chipped slightly on some bottles, though the seals have not been compromised and the wine looks to be in great condition. Some bottles also still have their original neck tag.

This wine was made in the province of Gattinara which lies around 50 miles north-east of Turin. The area has been producing great wines for many years, though this was only officially recognised in 1967 when it was awarded Denominazione di Origine Controllata (DOC) status which was then elevated to Denominazione di Origine Controllata e Garantita (DOCG) status in 1990. This put the wines on a par with Italy's greatest wines, such as Amarone, Brunello di Montalcino and Barolo.

1961 was an outstanding vintage with wines from Piedmont being rich and full with huge ageing potential. Castello di Lozzolo changed hands in the late 1960's when it was acquired by Berteletti Romolo. It is still producing wines today as well as bottling wines for a number of other producers.

Young Barolos can be tight and in some cases, in need of several decades cellaring to reach their full potential. This Nebbiolo has been well cellared for more than five decades and, for lovers of this type of wine, is in peak condition. It is well-priced and would make a great birthday or other anniversary gift.