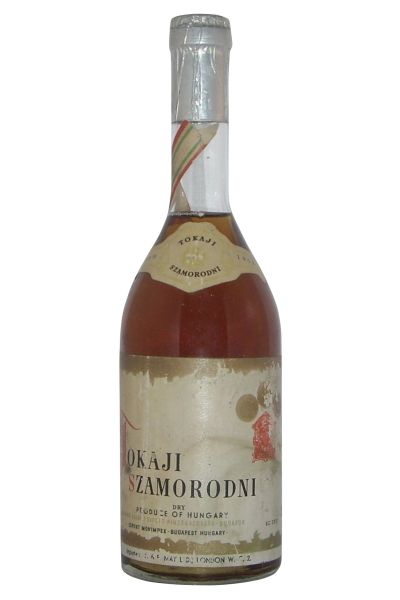 A vintage wine from 1953! Tokaji keeps better than any other wine and this bottle is in superb condition for a 1953 vintage. Whilst classed as dry, this wine is far from it and can be served with dessert or as a aperitif.

For a wine from 1953, this bottle is in great condition with the level at 4.5cm below the cork and a good, clear label.

Tokaji or Tokay as it is sometimes called comes from Hungary. As one of the oldest and most sought after wines, others have sometimes copied the name with France producing ‘Tokay d’Alsace’, which later became known as ‘Tokay Pinot Gris’ and Australia producing a dessert wine made with Muscadelle grapes which they too called Tokay. However, since 2007 the name Tokaji has been protected, which has curtailed its use outside of Hungary and Slovakia (where there is still a long running dispute with Hungary of the right to use the name).

Most fans of Tokaji think of it as sweet wine, with Eszencia being the sweetest and highest in price. There are however, also a range of dry Tokajis, known as Tokaji Furmint, Tokaji Sargamuskotaly, Tokaji Harslevelu and Tokaji Koverszolo. Rather confusingly, these varieties are also used to make the sweet wines too.

This is a really good example of a 1953 vintage wine (the year of the coronation of the Queen) and would make a excellent gift. This is our last bottle...